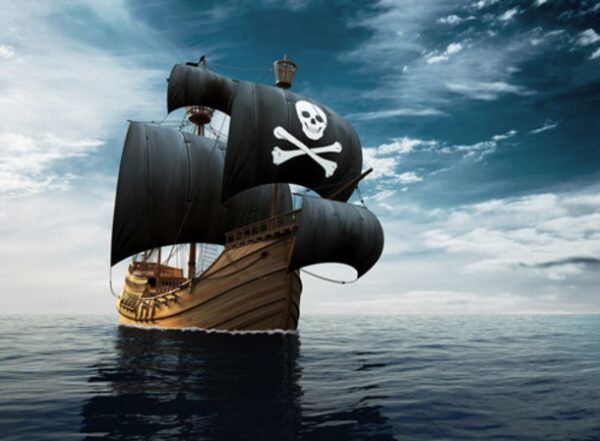 Ahoy there! So ye want to talk like a pirate? Ye’ve come to the right place matey! In celebration of #TalkLikeAPirateDay we’ve put together a collection of classic pirate words and phrases to spice up your vocab. Arr!

1. All hands on deck

Got an urgent task that’s popped up out of the blue? This is the only phrase you need to unify the troops when crisis strikes. Get yeself in the Cap’n state of mind by leaping up from your desk and crying this phrase, much to the confusion of your surrounding co-workers.

In ye old pirate days, this was a signal used on board a ship – typically in an emergency – to let crew members know they needed to go on deck and assist in keeping the ship steady. These days, people use this to indicate that the involvement of all team members is required.

Example sentence: We need to get this proposal over to the client by close of play, it’s all hands on deck.

Mix it up in your next meeting by shouting ‘Avast!’ to get the room’s attention. This nautical term, favoured by exasperated captains the pirate world over, is a command to their crew to stop or desist.

It’s believed to be derived from the Dutch ‘hou’vast’, which literally means hold fast, and it was eventually slurred down into avast. It was first used in the 17th century, according to Collins Dictionary, and these days it’s heard rarely. Today seems like the perfect opportunity to fix that, don’t you think?

Example sentence: Avast! We’ve got a packed agenda today, we need to get started.

Find a new way to express your surprise with a good old ‘blimey!’, a word which never really goes out of style. Along with its variant ‘cor blimey’, this is a fairly common British expression and a pirate favourite.

It first appeared in the late 19th century, and it has been suggested this word is a vulgar corruption of ‘God blind me’.

Example sentence: Blimey, it’s pouring with rain out there today.

Not to be confused with a derrière, a pirate’s booty is a collection of valuable things stolen from a person or a place. Also known as plunder, gains or haul.

The word booty originates from the 15th century French ‘butin’, which in itself derives from the Middle Low German ‘buite’, meaning exchange.

Example sentence: Take a look at this booty I swiped from the stationery cupboard.

How do you like your cackle fruit in the morning? Make breakfast more amusing by ordering fried cackle fruit, which for the swashbuckling kind is your typical chicken’s egg. It’s difficult to find the root of this particular term, but you could take an educated guess.

The cackle part could come from the noise chicken’s make, which to the untrained ear might sound like more of a cluck. One of the definitions of the word fruit: ‘the fruit of someone’s work or activity are the good things that results from it’. We’d say eggs are a pretty good thing, preferably scrambled.

Example sentence: I’ll have some bacon with a side of cackle fruit.

Spice up your weekend by enjoying a beverage – pirate style. Ye olde mysterious yet delicious alcoholic drink, pirates were quite partial to some grog. Grog can be defined as any strong spirit (though it was usually rum, of course) diluted with water.

The informal name is believed to have originated from Edward Vernon, a British admiral from the 18th century who issued naval rum diluted with water. His nickname and his creation took its name from his grogram cloak.

A fantastic new insult to add to your vocabulary. If you were accused of being a hornswoggle aboard a pirate ship, you were a cheat, and you could probably expect to walk the plank at some point in your near future.

Hornswoggle can also be used as a verb, meaning to deceive or trick somebody. It’s not clear where it originated, but it’s possible this was a nonsense word one infuriated seaman shouted, which was picked up by the crew and taken to every port.

Example sentence: You don’t want to play Scrabble with Larry, he’s a hornswoggle.

You might be surprised to learn that a landlubber is not actually a land lover, as oft interpreted. A landlubber is someone who is not used to, or simply does not like, travelling by boat. They tend to be unfamiliar with the sea and all its bounties.

Often used as an insult by proud pirates, a landlubber is defined by their awkwardness at sea. How can you make this word more applicable in our modern land-favouring lives? Draw inspiration from its root, ‘lubber’, meaning clumsy or uncoordinated.

Example sentence: Eric dropped his coffee down his shirt, he’s SUCH a landlubber.

Another pirate insult to add to your repertoire, a rapscallion is a mischievous person, usually of ill repute.

Recorded in the 17th century, rapscallion is likely to be an alteration of ‘rascallion’, which was a fanciful elaboration of the straightforward ‘rascal’. Synonyms of this flamboyant word include rogue, disgrace, and cad.

If you were to scupper a plan, it would mean to spoil it completely. If you were to cry ‘scupper that!’ aboard a pirate ship, you’d mean to throw something overboard – more often than not literally.

This phrase is tied to the early 15th century meaning of scupper, which was an ‘opening in a ship’s side at deck level to let the water flow out’.

Example sentence: Scupper that! I have a better idea.

Sea legs were an asset to be proud of in the Golden Age of Piracy, referring to the ability to adjust one’s balance to the swaying of the ship, especially upon rough waters.

After extensive time at sea, a sailor would often have difficulty regaining his ‘land legs’ and walk with a swagger. Next time you spot your friend swaggering up the road, be sure to ask him if he has his sea legs.

Example sentence: I prefer planes to ferries, I don’t have my sea legs yet.

Classic pirate lingo, appropriate in every situation. Upgrade your ‘blimey’ to a hearty ‘shiver me timbers!’, another way of expressing surprise or strong emotions.

In stormy weather and choppy seas, the supporting timbers of a pirate ship would be prone to shiver, it’s likely this exclamation was a result of the crew’s surprise.

Example sentence: Shiver me timbers! £10.99 for a fish finger sandwich?

It’s a lot to remember, we know. Score some quick wins on #TalkLikeAPirateDay by swapping out ‘you’ for ‘ye’ and ‘yes’ for ‘aye’. Go forth and spread the pirate way, me hearties.