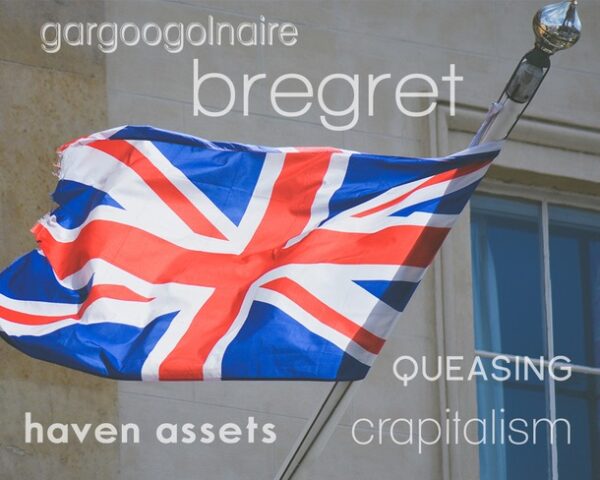 From ‘bregret’ to ‘haven assets’, Lucy Mangan takes a look at your recent word submissions

Brokay. Let’s brget it all brout of the way brnow, yes, and brmove onto other things.

There’s Bregret (from contributor MelonyLiar) amongst those who voted to leave the EU but woke up on June 24 to find that what they (Bregrexiteers, from AustinAllegro) intended as a cathartic protest had delivered the nation into chaos and, fairly swiftly thereafter, the hands of either Theresa May or Michael Gove. The air has filled with the sound of Brexcuses ever since, along with the sorrowful sounds of all those who voted Remain licking their Brexit wounds, trying to stanch the flow of hope, optimism, skilled labour, investment and trade deals out of the country.

Others, of course, are simply filled with Brexcitement at the fulfilment of their hopes occasioned by what the Washington Post referred to as a “Brexecution”.

So now. Let us turn to other things. Or at least start tripping gently across a bridge to other things, given that our first two submissions, both from new contributor contentious, may be considered – depending which side of the brfence you’re on – not entirely unrelated to the Brexaster.

The first is “crapitalism” – the practice of appointing friends or colleagues to positions of power or influence regardless of their ability or competence. To which one can only reply – gosh. Imagine. The second is “queasing”, which I first assumed was a name for the feeling you get when you unexpectedly catch sight of Nigel Farage’s face, but is actually a contraction of “quantitative easing”.

This is not only easier to say but also nicely evokes the feeling you get when you try to understand what quantitative easing is, or the one that you get when, having understood it, you begin to intuit how royally messed up an economy must be to have got involved with it.

Never mind – maybe your “haven assets” (submitted by tikitaka) will save you! Those are all the investments you have that are designed to withstand volatility in the markets and even appreciate in value during times of turbulence…what’s that? Oh, you haven’t? Well, to be honest, the usual safe bets have not actually proven themselves to be all that safe. There is still a good chance that if you convert all your money now into cans of beans, cigarettes and some rudimentary equipment for making water potable you could be king this time next year.

Or perhaps a “gargoogolnaire” – thank you, new contributor 666Herbert2 – which would mean you owned whatever the post-Brexit equivalent of googol-squared, or ten to the power of 200, pounds is. If all goes well, you will be swimming in the thriving currency of your native land. If not, you will be effectively announcing that you have a tin of coffee somewhere. “I am a tin-of-coffee-naire!” you will cry, desperately, to the unheeding heavens and possibly the sound of gentle chuckling from any passing Scottish tourists.

Well, we haven’t actually moved that far away from the bropening brparagraphs after all, have we? Never brmind. Normal service bresumes next time. Until then, send beans.