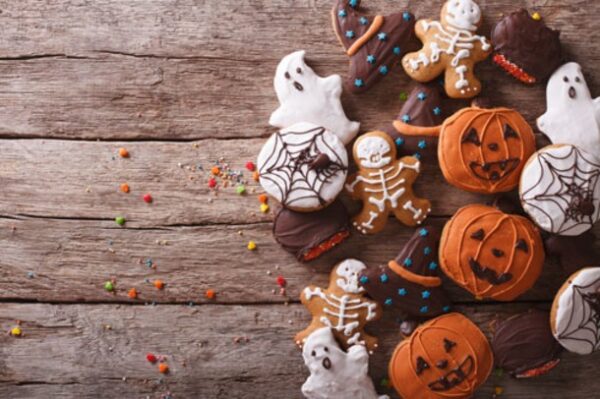 As leaves start to fall and the world develops a sepia tint, so begins autumn – a mystical time of year, with Halloween historically believed to mark the turning point of summer into colder months. This spooky season we’ve compiled a list of traditional Halloween words and phrases to examine their origins.

The word Halloween is recorded as early as 1745. It was popularised in 1785 by Robert Burns, the Scottish writer, in a poem of the same name. Burns took care to include a detailed footnote explaining the custom.

Hallow, meaning ‘holy person/saint’, is largely obsolete in English language. Halloween is a contracted form of All Hallow Even, the Eve of Saints, celebrated on the last night of October in the old Celtic calendar.

The celebration of Halloween has been linked to the Gaelic festival of Samhain and the Western Christian feast of All Hallow’s Day, an event dedicated to remembering the dead, including saints (hallows), martyrs and all of the faithful departed.

Thankfully not the kind of ghost you might experience on Tinder (it’s debatable which is more unsettling). A ghost on Halloween is likely to be wearing a white sheet, in the hope of channeling the pale, shadowy vision so often associated with the idea of ghosts.

In its most traditional form, a ghost is the disembodied spirit of a dead person that someone believes can be seen or felt in the physical world – the English representative of a West Germanic word for a supernatural being.

Ghost is rooted in the Old English gāst and the Old High German geist, meaning spirit. Many Indo-European words for soul and spirit are doubled with a reference to the supernatural, and the idea of a deceased’s spirit returning to earth to wander and haunt the living.

What’s the difference between your everyday pumpkin and the anthropomorphised jack-o’-lantern? Well, one of them used to hold down a decent job.

The phrase can be traced to 17th century Britain, where it referred to the night watchman who carried a lantern as he patrolled for danger. Later it was attributed to a natural phenomenon witnessed in southwestern England, where flickering light could be seen over wetlands and peat bogs.

By the mid-19th century the humble turnip lantern, carved by children and used to spook people, became known as a jack-o’-lantern. Immigrants brought the custom to North America, where pumpkins became a part of the tradition and eventually became Halloween’s reigning gourd.

A popular past-time on Halloween, mischief was not always associated with harmless fun and pranks.

Mischief is first recorded in the 12th century in Old English ‘meschef’, described as an evil condition, intended to cause harm, trouble, annoyance or vexation. This was a derivative of the Old French ‘meschever’, meaning to end badly or cause grief.

It was not until 1784 that mischief was used in the light-hearted sense, meaning a playful malice. In the 19th century, Mischief Night emerged in England around the same time as Halloween, where children engaged in ‘wayward but not malicious behaviour’ – this was celebrated in Scotland and Ireland on the night of Halloween.

Guts and gore galore, Halloween goes hand-in-hand with gruesome costumes and films. Gruesome is defined as something extremely unpleasant or shocking, intended to cause great horror.

This comes from the 16th century word ‘grue’ – used in northern England and Scotland, – meaning to shudder, to which the affix ‘some’ was eventually attached. Similar words existed in other languages, such as the Middle Low German ‘gruwen’, meaning to shudder with fear, and the Scandinavian ‘grue’, meaning to dread.

Historically, usage of the word gruesome was infrequent. In the 20th century it experienced a surge in popularity, likely due to the Scottish writer Sir Walter Scott. Its resurgence also ties in with the time Halloween celebrations became popular across America.