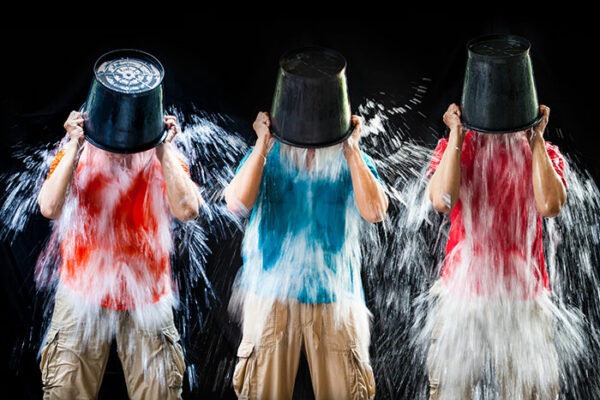 Let’s be honest. Last month’s top buzzword has been Ice Bucket Challenge. And I don’t have to define it for you, because we’ve all seen more videos of celebs and four-year-olds alike pouring cold water over their heads than we saw of duckface selfies last year.

The Ice Bucket Challenge, however, is more than just an internet meme. The humorous and embarrassing video should be accompanied by at least two nominations and a donation to a charity for amyotrophic lateral sclerosis (ALS), which is a kind of motor neurone disease commonly called Lou Gehrig’s disease (after the famous US baseball player who was first diagnosed with the illness). Here in the UK the donations are in support of motor neurone disease (MND) in general, though other charities such as Macmillan have also been using it.

Seriously, if you are doing the Ice Bucket Challenge or have done it already, don’t forget to donate.

August is also the month of the Glorious Twelfth (the opening of grouse shooting season), but if you’re not keen on hunting and shooting, then you might like the other, non-lethal August event: the Perseid meteor shower. This year, however, the Perseids had to compete with a supermoon, which is a full moon occurring at the same time as the moon’s closest approach to Earth.

But these weren’t the only heavenly bodies visible in Britain last month. In August Glasgow hosted the Commonwealth Games, which featured such an unprecedented number of athletes celebrating their performances with selfies that they were humorously dubbed “the Selfie Games”.

In darker news, the Islamic militant group ISIS, which only began trending on a large scale earlier this summer, has officially become known as Islamic State.

In August we also lost some very special people. Richard Attenborough, Lauren Bacall, and Robin Williams all passed away last month. Heartfelt tributes were paid to all three, but the particular surprise of Robin Williams’ death yielded what may be the most touching of internet tributes. All three actors trended heavily in search engines in August, but Robin Williams gave us “O Captain My Captain” as a trending topic.

O Captain! My Captain! is a poem by Walt Whitman, an elegy for the assassinated US President Abraham Lincoln. It is associated with Robin Williams through the memorable finale of the film Dead Poets Society in which the devoted students stand on their desks and say “O Captain! My Captain!” as their teacher (played by Williams) leaves his classroom for the last time.

Other phrases from Robin Williams’ many films, including “bangarang” and even “jumanji”, also trended, but “O Captain! My Captain!” outstripped them all.