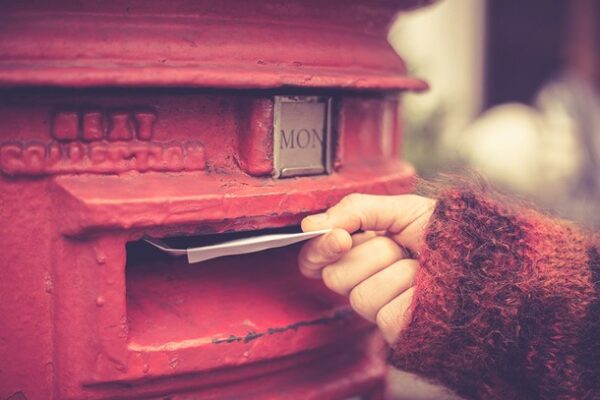 In celebration of World Book Day we have a special delivery today, from the students at Moville Community College in Donegal. Kay Ward and her students were looking at poetic techniques in class and talking about why poets use certain words instead of others and even sometimes make them up. From there it was but a quick hop, skip and jump to making up their own and sending them in for Collins dictioneers’ delectation.

Young Oisín White seems to speak from the heart with his invention: “discracemas”, meaning doing something disgraceful over Christmas. “It’s good for social networking,” he advises. “If you get rotten socks, you can post a picture on Instagram and say “discracemas”. Consider that locked, loaded (and tucked next to Oisín Gilliespie’s equally handy “grotten” – a potent mixture of “gross” and “rotten” and Seamus Kelly’s “nat”, meaning “not nice”) for next December, Oisín’s and Seamus, thank you. I will also use the latter two if I ever get another invitation from my “bilingo” aunt – “someone addicted to bingo”, according to David Henry – who I now realise only ever wants me there to keep an eye on her eleven million cards in case she needs to nip to the loo. 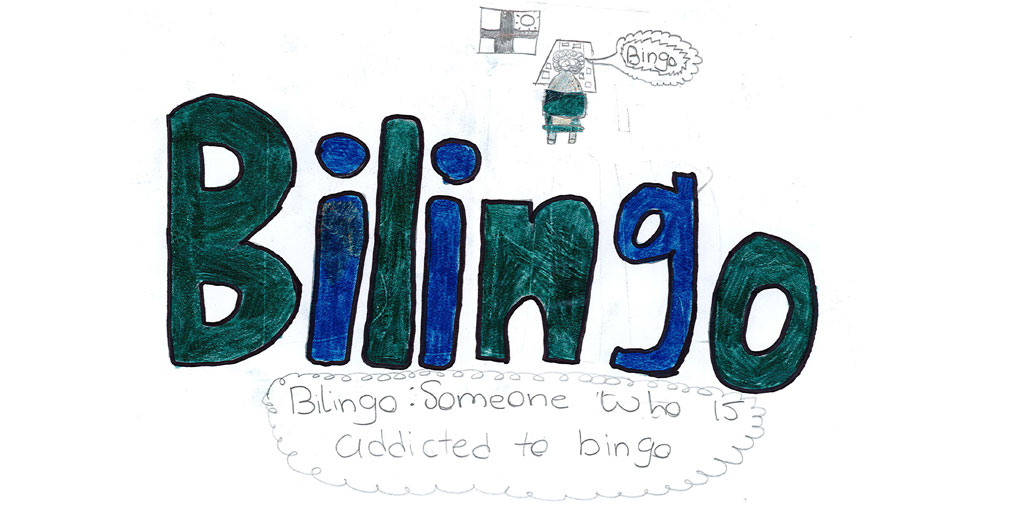 But let us not be pessimistic – or “flaminga”, which Jasmine Farren submits, to mean “being sad – because it’s fun to say and might cheer you up”. We might get some “conooper” presents! That’s a word meaning “super, fantastic”, formed in a burst of exuberance by Tami Gallagher (“You would use this word,” she assures us. “It’s short, catchy, spelt the way it sounds and rhymes with its meaning”, all of which are indeed excellent qualities in a word). Or something “uberlicious” – “a reasonable-sized word” points out its creator Caitlin Simkins, and solving the problem of there having been previously “no word to express super-deliciousness”. 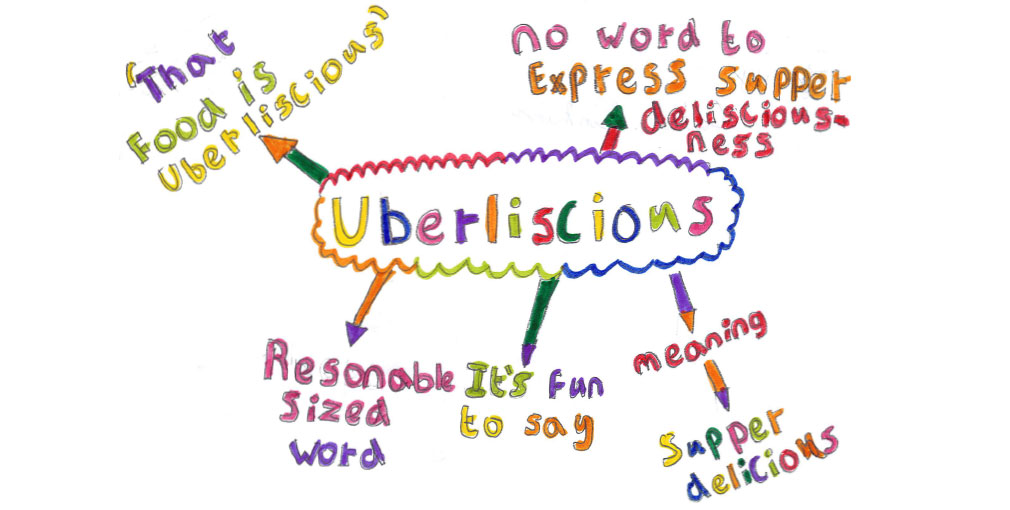 You would then surely be seized by a feeling of “urshka”, Amélie David’s contribution, designed to replace “OMG!”. “You can use it,” she explains, “whenever you feel an excitement rush inside you. You can say it with great passion and any audience can use it. You can have an urshka moment!” 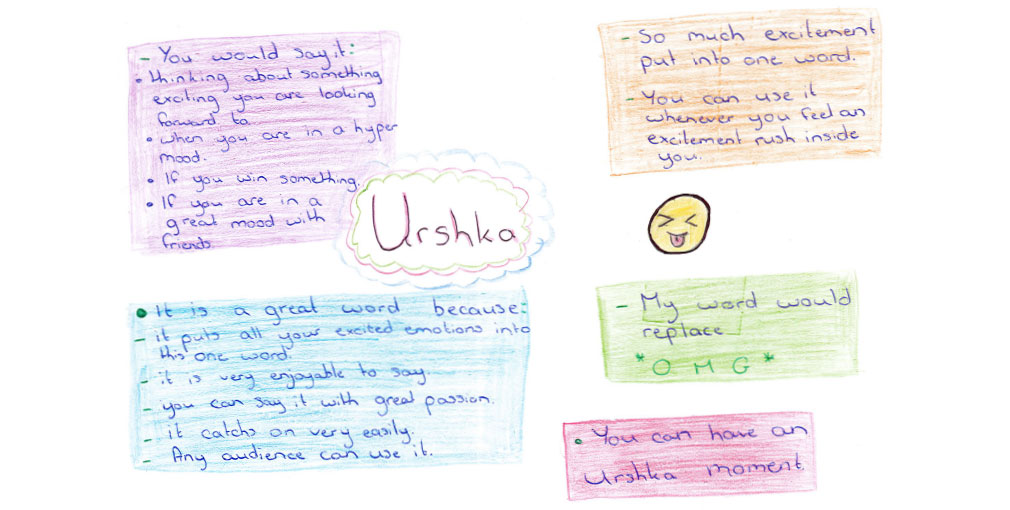 And you can turn a fashion frown upside down with Clodagh Skelly’s “blavy”, a blending of “black” and “navy”. Why? Because “people say it is a fashion crisis to wear black and navy together, so why not use a more exciting word to describe this?” Why not, indeed, Clodagh? You have given me the confidence to throw on some blavy this very day.
Deirdre McCauley has solved another of my problems by providing me with a name for a conundrum I face almost daily, because I am so frequently hungry but too lazy to make myself anything to eat. I am, she submits, “hungzy”. “An emotion,” she says wisely, “often hard to describe but experienced a lot.” 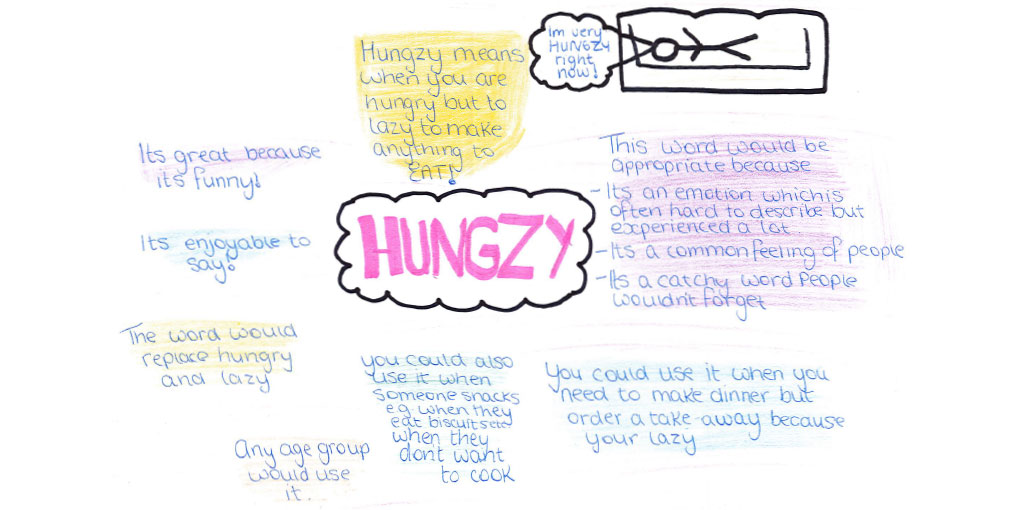 Maybe I suffer from hungzer so often because I am a bit of a “chuacter” – another word for “eejit or idiot”, provided by Aoife Farren

Treasa McGonagle gives us “lisars” for “a group of people who always lie”, Sinéad Gillespie gives us “laplet” – a tablet and laptop combined, and a word as neat as the concept – Shá¬¬nnon McGonagle gives us “fubaru”, a contraction of “fan” and “Subaru” on the unassailable grounds that “There is no word to describe someone who loves Subarus” and Conor McDaid gives us “printure” meaning “printed picture” (“Can be useful,” he notes, “for writing songs”). And finally, Elaine McDonald gives us the inspiring “courbitious”, meaning “someone who has the courage to carry on even through tough times.”

Thank you so much for your brilliant words, and Happy World Book Day, everyone. I hope it is packed with conooperly urshka moments for you all.