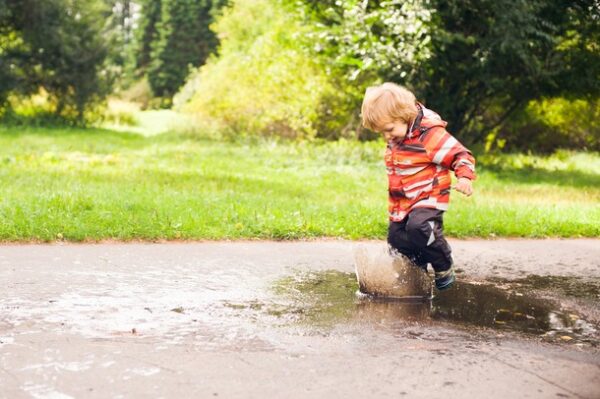 Lucy Mangan is back with your new word submissions, perfect for wet and rainy Easter holidays!

I’m away for Easter with my son at the moment and I am delighted to be able at last – courtesy of new and, as you will shortly see, aptly named contributor HADDOCK – to put a name to his preferred activity; he is spending much of his time spannelling. This is apparently a HADDOCK family invention and means playing about with water – in puddles, sinks, gutters, streams as the mood takes you – as a child. I think this is both too useful and too charming not to be adopted more widely. Start splashing spannelling about in conversation. Let’s flood our conversations with a term all parents are surely thirsting for.

Oh, let me enjoy myself – I’m on my holidays, and it will be hours yet before the child is in bed and I can let myself get maggered. This, according to another new contributor, terrylee, is the warm, fuzzy state of mind that attends being tipsy. For me, that’s about two drinks (glass of prosecco, if you’re asking, followed by another one, thank you so much!) into it. Another two (oh gosh, really? I shouldn’t, okay, go on then, just a vodka tonic. And another, but make it a double this time, save you going back) and I’m drunk and morose, and after that of course (it’s my round! What’s everyone having? Okay, all of that, barman, and two triple amarettos, I am in it to win it) it’s just violence and sexual depravity until someone makes me go home. But maggered. Maggered is good. Maggered is the aim. It’s just such a small target.

I should try and be more civilised. Take up a hobby, one that’s not measured in units of alcohol. I could become an amasser (or purveyor, or curator, I suppose) of ‘agriculturia’ – collectible agricultural instruments. A brief rootle round the internet confirms what one instantly suspects – that it is a beautiful sea of knowledge in which one could happily drown. Corn mashers! Muck cromes! Bagging hooks and pulse forks! Horse hames and hoots! As things stand, I think I would hope to specialise in chaff cutters (also known as chaff boxes or chaff horses) – especially given my current location. Norfolk was apparently the seat of innovation; the fluted feed roller, which compressed the straw before it was cut, was introduced here. In your face, Suffolk, and countless still lesser agricounties!

It is with resoundingly hollow laughter that I leave you with helenproof’s news that carpet treader is an estate agent term for time wasters. As someone who recently moved house, I can only say that such a half-arsed effort at both humour and insult seems about right from the world’s worst and most parasitic professions and that I suspect clients’ terms for estate agents would fill a book. Mostly with new combinations of ancient Anglo-Saxon terms, still readily comprehensible to all those in need.

But enough, now. Someone has just brought me that first glass of prosecco. Until next time, my little muck-cromes – cheers.