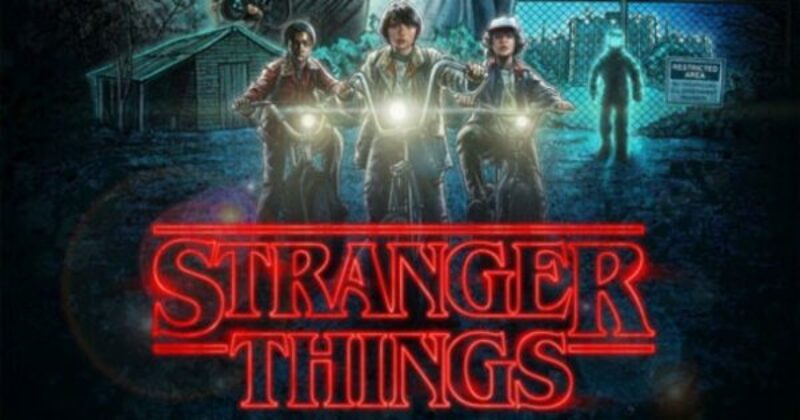 With Stranger Things 2 now streaming on Netflix, we’re here to help you get up to speed with your ‘80s terminology. We’ve selected some of our favourite words from the show, from the eerie Upside Down to Eleven’s favoured insult, mouthbreather.

Let’s start with your basic parallel universe, shall we? The Upside Down, the source of all the weirdness in Hawkins, Indiana. We first hear of the Upside Down in Chapter 5, The Flea & The Acrobat, when the boys ask their science teacher about alternative dimensions. Eleven gives it a name when she flips the D&D board to illustrate how the two realms connect.

The definition of the phrase upside down is to be turned over completely or inverted. It can also mean to be confused, muddled or topsy-turvy, often in a chaotic or crazy manner. We’d probably agree that a decaying otherworldly dimension infested with supernatural monsters is chaotic.

One for your everyday vocab, ‘Lando’ is a pop culture reference to Star Wars, more specifically the epic American space opera of 1980, ‘The Empire Strikes Back’. In this context, uttered by Dustin as they hide from the government, it’s used to call out a traitor.

Dustin uses the word Lando as shorthand for Lando Calrissian, the Baron Administrator of Cloud City, who invited Darth Vadar to dinner and lead Hans Solo and friends into a trap. Next time you feel like someone has double-crossed or betrayed you for their own gain (noble or otherwise), be sure to yell ‘Lando!’

‘I just didn’t want you to think I was such a wastoid, you know?’ – Mike Wheeler

One of the rare flashes of ‘80s terminology that made the cut for Stranger Things, wastoid pops up in a conversation between Mike and Eleven after a run in with bullies. A wastoid in this context is used to describe someone as a waste of space, or a loser. This is slightly different to how it might usually be perceived.

In ‘80s cult classic The Breakfast Club, Bender is described as a wastoid because he wanted to ‘blaze up’ after fetching drugs from his locker. As such, we can assume the ‘waste’ in wastoid refers to stoners or wasters. The suffix ‘-oid’ means ‘similar to, but not the same as’, or ‘having the likeness of’. Thus it can also be used as a derogatory term to describe someone you might regard with contempt.

‘Do you really want to fight the Demogorgon with your wrist rocket?’ – Dustin Henderson

Technically this one falls under D&D terminology, rather than ‘80s expressions, but given the number of times Demogorgon was referenced, it had to make our list. The Demogorgon was the nickname of the Monster which terrorised the town of Hawkins for the duration of season one. In D&D, the Demogorgon is a two-headed villain known as the Prince of Demons.

It is likely to have been inspired by the Demogorgon that can be found in the Collins Dictionary, described as a terrifying and mysterious demon of the underworld in ancient mythology. The exact etymology is unknown, but it was probably influenced by the Latin ‘daemon’ and ‘gorgon’.

‘We can just…just, like, chill in my car…’ – Steve Harrington

A slang term that has stood the test of time, chill means to relax, or to be calm. This can be used in the context of asking someone to hang out with you – Netflix and chill, anyone? – or telling somebody to calm down, as Nancy sharply tells Barb earlier in the season.

Chill is a word which is very much of the cultural moment, gaining momentum in the early ‘80s through hip-hop artists such as The Sugarhill Gang’s ‘Rapper’s Delight’ and Run-D.M.C’s ‘My Adidas’.

‘We forget the weirdo and go straight to the gate.’ – Lucas Sinclair

Whilst searching for their missing friend in the woods, Mike, Lucas and Dustin come across Eleven, the strange girl with the buzzcut and somewhat limited vocabulary (fun fact: Eleven only spoke 246 words in the entirety of season – an average of 30 words per episode).

As they struggle to understand her powers and her origin, Lucas quickly brands her a weirdo, a much younger synonym of eccentric, weird and crazy. This term emerged in the mid-20th century, used to describe a person who behaves in a bizarre or eccentric manner and warrants your disapproval.

Episode one is peppered with this word, setting the tone for how the teenagers interact with each other. In the mid-1980s, when Stranger Things is set, douchebag would have been a relatively new insult. In both British and US slang, it’s used to describe a ‘contemptible person’.

The word is thrown around casually by the characters, from the younger boys to the older teenagers. It would have been a fairly prominent part of an ‘80s teen’s vocab, popularised by the Saturday Night Live skit ‘Lord and Lady Douchebag’, E.T., Revenge of the Nerds and, slightly later, the Schwarzenegger classic Terminator 2.

‘I was tripped by this mouthbreather…’ – Mike Wheeler

Another ‘80s insult that went right over Eleven’s head, a mouthbreather in US slang is defined as a stupid or dim person. Mike further elaborates when explaining this to Eleven as ‘a dumb person, a knucklehead’.

Mouthbreather is a keystone moment for Mike and Eleven as they bond over bullies, adults that seek to harm them and, eventually, the massive Demogorgon they must face. Mouthbreather is a pejoration of a medical term, used to describe someone who breathes through their mouth instead of their nose. Mouthbreather picked up steam as a derogatory term in the 1960s, and didn’t feature in slang dictionaries until the mid-1980s.