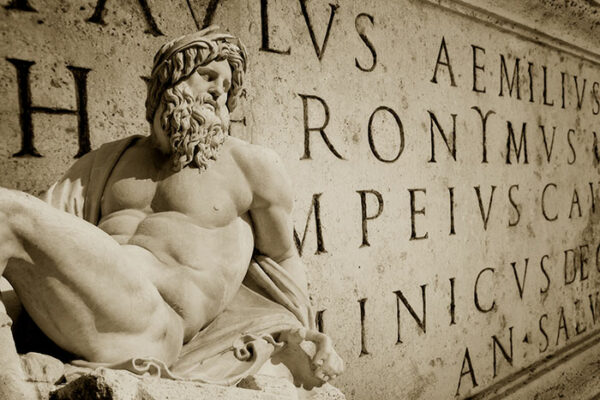 Britain was a province of Rome for almost 400 years but when the Western Empire collapsed Germanic invaders brought to these islands a language that eventually became English. Latin made a comeback, however.

The British Isles converted to Christianity during the Dark Ages and Latin was the language of the Church. English, though, remained a mainly Germanic language until 1066 when the Norman invaders intermingled with the native Anglo-Saxons and many Latinate words became part of English.

This combination of Latinate and Anglo-Saxon words is a defining feature of English, and speakers often have options when they speak. For example, they can ‘stay’ somewhere or they can ‘remain’; they can ‘stop’ or they can ‘desist’. As a rule, words that derive from Latin (such as remain and desist) are more formal than their Anglo-Saxon counterparts.

The Language of Scholars

Until fairly recently Latin was the language of scholars and many of the words borrowed by scientists, doctors, and lawyers filtered into everyday English. Although Latin is no longer the language used in universities, academics in every discipline continue to plunder the ancient Roman tongue to describe the latest innovations and to name species in the natural world.

Latin is also the source of many phrases in English, often as a result of their use in legal and church terminology. Educated speakers were so familiar with Latin that they never bothered to translate such terms into English, thus we speak of non sequiturs and quid pro quos, of doing something ad nauseam or being in situ.

Latin phrases have also been the source of many common abbreviations but how many of us realize that when we use AD (anno Domini), e.g. (exempli gratia), i.e. (id est), or PS (post scriptum), that we are using the language of the ancient Romans?