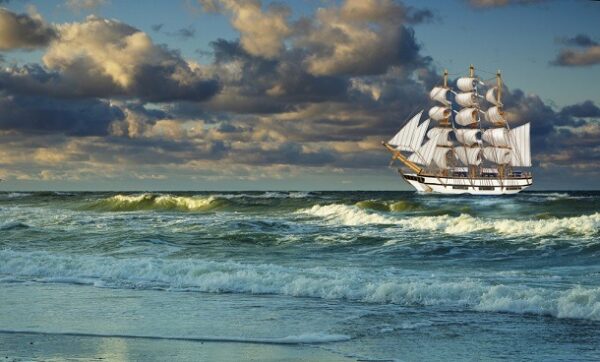 Avast! Lucy Mangan gets nautical with your recent word submissions

The submission “jackspeak”, from Tommy, has sent me off on such a voyage across the seas of knowledge that it is only with the greatest effort of will and hauling on the mainbrace (or something) that has allowed me to return to dry land with my findings. “Jackspeak” means “naval slang”. ‘Jack’ was a common alternative term for ‘man’ or ‘boy’ back in the day and Jack Tars – jolly or otherwise – being specifically sailors because of all the waterproof tar they necessarily dealt with.

And truly, jackspeak hath given us much. There is arguably a nautical derivation of everything from “running the gauntlet” (a punishment – being beaten bloody by your seamates as you ran down between two rows of them), to being “caught between the devil and the deep blue sea” (‘the devil’ being a name given to the join between a ship’s deck’s planking and the top plank of the ship’s side and which would need to be caulked periodically to keep it watertight – a job that would see some unfortunate rating either dangling over the side or working perilously near the deck’s edge, over the water) to “showing a leg” (dating from the days when matelots weren’t allowed shore leave in case they deserted and were allowed to have their wives on board instead. In the mornings, anyone left in bed was commanded to “show a leg” to prove that they were female and didn’t have to be doing more seaworthy tasks elsewhere.)

If you want more – and how could you not? – there’s plenty in the Covey-Crump collection (the first official collection of naval slang, gathered by former Naval Assistant to the Chief of Naval Information Commander A Covey-Crump and published in 1955) and in a book entitled (you’ll never guess) Jackspeak, by former Surgeon Captain in the Royal Navy (aka the Andrew, or Andrew Miller, after a notorious press-ganger) Rick Jolly OBE after he swallowed the anchor (retired). (You could also take a look at “chuff chart”, which we covered here a few months ago, if you like.)

Avast (from the Italian ‘bastare‘ or Spanish ‘bastar‘ for ‘enough’) ye, though, me hearties! Look at the time! We must get on. For we also have submissions from new contributor bridle17, whom we thank for “arenology”, the study of enduring BBC arts documentary strands…No, I’m kidding! It’s the study of sand (from “harena”, the Latin name of the fine sand strewn about what would soon become known as sporting “arenas” to soak up the gladiatorial and other blood spilt) and Jaybee, who gives us “nimbargentism”, which is the practice of looking on the bright side of everything. Finding, you might say, the silver (in Latin, argentum) lining to every cloud (Latin, nimbus).

Then there’s “textruption” from Daved_Waschman, a much-needed name for the disruption caused to the flow of conversation caused by a text that, apparently, MUST be read before your interlocutor can possibly finish interlocuting with you. And “quillow”, a more soothing portmanteau from moneill, meaning “a quilt you have folded up to use as a pillow.” What a tender world you live in, moneill, and how I envy you.

See you next time, me hearties. Anchors aweigh!