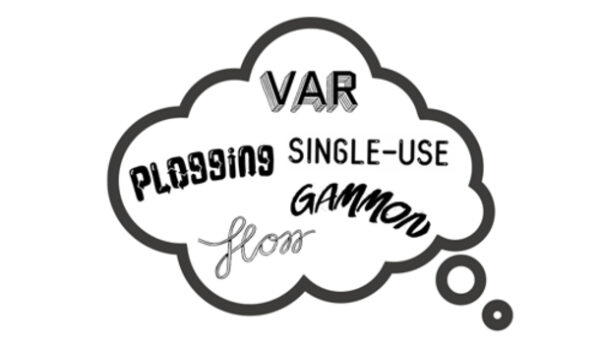 Some people get hyped for Halloween, others are crackers for Christmas. Here at Collins Dictionaries, Word Of The Year is like all the major annual holidays rolled into one. We arrive at work on the glorious day, dressed as giant dictionaries, clutching our reusable coffee cups in honour of single-use… Okay, that’s all fake news, but we do enjoy it. Without further ado, let’s dig into 2018’s words of the year and why they secured a spot on the shortlist.

2018 was, without question, the year of the eco-warrior. In the aftermath of David Attenborough’s visually stunning – and somewhat shocking – Blue Planet II, which aired at the end of 2017, sustainability became a pressing issue on the public agenda. Enter our #CollinsWOTY winner… single-use!

The plastic bag tax, a crackdown on disposable items such as cotton buds and coffee cups, and popular global beverage chains declaring their commitment to reducing waste by offering discounts to those who bring their own cup, 2018 was a watershed moment for individuals and corporate bodies alike that will hopefully lead to a brighter, more sustainable future. A pox on the house of those that forget to take their stainless-steel water bottle to the gym! Or at least, feel a little ashamed of your contribution to the global single-use plastics crisis. You’ve made a turtle sad.

Another ecologically influenced contender on our shortlist comes to us via Scandinavia. If better heart health isn’t enough to get you out of bed for a run, plogging combines jogging with litter picking, to improve your health and your environment. Next time you’re out pounding the pavements, keep a bag on hand for all that rogue litter cluttering your local beauty spot…as long as it’s not plastic.

Floss is one of the shortlisted words that has adapted a whole new meaning in 2018. No longer the pastime of the hygiene-conscious, the floss is sweeping across popular culture like a Mexican wave (which is SO forty years ago, by the way). When your dentist told you to floss daily, we doubt this is what was meant, though the health benefits of a little dance in the morning are surely far superior. This tricky dance move is not for everyone, no matter how easy the popular video game Fortnite makes it look.

Speaking of cultural phenomena, let me hear you say ‘Ooh, aah, VAR!’ World Cup fever infected almost everybody this season, but particularly the English, as we resolutely believed that it may, in fact, be coming home. VAR technology – video assistant referee, in case you were wondering – was used for the first time in the 2018 FIFA World Cup, after being trialled in other competitions, and its presence led to a somewhat mixed reaction. Some loved it, others hated it: we suspect feelings towards it may have been influenced largely by team loyalties.

Last, but not least, on our esteemed shortlist is gammon, but not as you know it. Far from the haunches of ham that dance in front of your eyes, the term evolved in 2018 as a way of describing a person who is often middle-aged and white, with reactionary views, especially one who supports the withdrawal of Britain from the European Union. It seems we’re 180 years behind the trend, as this usage can be traced back to Mr. Charles Dickens. It didn’t seem to catch on, perhaps because it put people off their dinner.

Immerse yourself in the full #CollinsWOTY experience by following us on Twitter, reading the full shortlist for this year, and entering our competition for a chance to win a goody bag of sustainable products and a hot-off-the-press copy of the new Collins English Dictionary 13th edition! Click here for more details.