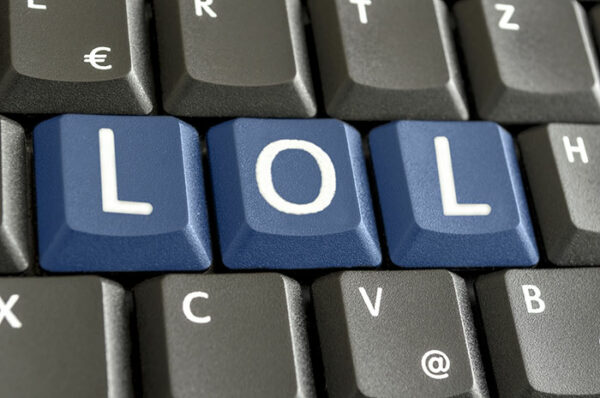 Thank you, tyler.hartleb, thank you for supplying the abbreviation I have needed my whole digital life: ‘LIMH‘. It stands for “Laughing in my head” and thus at last gives an almost literally voiceless community a voice. Or at least a presence, which is actually all we really want. I am a silent laugher in real life. I have a fake laugh that I do on the phone to show that I’m still there and have appreciated a joke but otherwise stout Cortez, silent on his peak in Darien, has nothing on me. Every time I type ‘LOL’, ‘ROFL’ or ‘LMAO’ I feel estranged from myself. Who is this hysteric who gives external expression to her emotions? Not me. Gerroff. But now those of us of a more controlled, undemonstrative nature (or “dead inside” as more than one of my nearest and dearest has defined it over the years) have something more suitable to deploy. Personally I would prefer ‘LOTI’ – laughing on the inside – because it’s more memorable (abbreviations with silent letters are just asking for trouble) and I’m eager to give our expression parity with the Lollers and Roflers in as many ways as possible, given their natural tendency to drown us out. But if LIMH’s got a foothold, let’s go with that. Spread the non-word, people.

Keirawong’s ‘followgy‘ – an apology on Twitter, usually insincere and done as a damage-controlling PR move – is about as ugly as the process itself, and as I admire consistency above all things, I applaud its advent.

The same cannot be said for ‘enpole‘, submitted by kev. It means to put something on a stick. Which…I mean…well – just – just…just, ‘No’, really. Just NO.

‘Vest buster‘ is the name given to a handgun cartridge that can penetrate the protective layers of a modern and apparently misleadingly-named bulletproof vest and was submitted by WritersCramp. I have visions of WritersCramp caught up in a warehouse shootout in Chicago, desperately tapping out his/her contribution while crouching behind an upturned table as the bullets fly. WritersCramp, where are you? Shall we come and get you? And while we are grateful for your contributions, could we suggest that you stop for a moment and maybe call 911 instead?

Finally, there’s ‘code monkey‘, courtesy of grantph and meaning “an unskilled computer programmer.” It’s one of those words that suddenly skews your perspective, offering a view of the world quite at odds with your own. Because to me, there is no such thing as an unskilled computer programmer. I’m like Maureen Lipman in the old BT “you get an ‘ology, you’re a scientist” ads. You programme a computer – you do anything with a computer other than type on it or punch it as tears of frustration course down your face – you’re a genius. But clearly there is another world in which these people are distinguishable and rankable. But take heart, code monkeys. In the real world out here, you’re all gods to us.