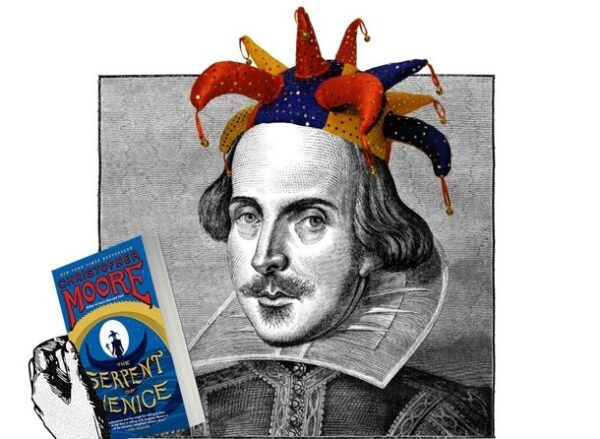 Will in the Words

In honour of Shakespeare Day, Christopher Moore, author of The Serpent of Venice, reminds us of Shakespeare’s gift to the English language.

We all know the poet and playwright, but Shakespeare the wordsmith also coined more than 1700 original words in the English Language. Proper words, too, like lustrous and negotiate, created by one fellow, not just the crap words like gnarled and puking, which he quite possibly put together with his team of Bacon, Marlowe, Oxford and Derby.

But before we work our firkins into a froth surmising how the dubiously educated son of a glove-maker came to invent so many words, we must look at not only the man, but his time, and the time in the language’s life as well. It’s not as if none of those 1700 words had ever been spoken. More likely, they’d just never been written down. The first printed use of a word in English is generally cited about a hundred years before Shakespeare was born (printing had really only taken off in 1476), when an English merchant called William Caxton dragged a movable type printing press home from a trip to Bruges and started translating the great books of the world into English. Unfortunately, Caxton wasn’t fluent in all the languages he translated, and often, if he didn’t know a word, he would substitute a native word, and if he was out of a particular letter, he would substitute a letter he had in abundance. (This is the reason we have to explain to every six-year-old why “enough” has an “f” sound but “ghost” or “night” do not.) Caxton died in 1492, with discovery of the New World, secure in the knowledge that there was an entirely new continent waiting to bollocks-up the English language.

But English has always been a resilient language. Even Norman conquerors adopted the English language of the Anglo-Saxons, because all the consonant sounds in their own language, French, had gone strangely silent. In fact, when faced with the Welsh language and its abundant consonants, the Normans were forced to choose between adopting the language of the conquered, and living a life of mime.

When Will came along a century after Caxton, the English language was still young, mostly unwritten, and ripe for invention. The Bard wrote to the sound of the words (for an audience who learned most of what they knew by hearing it), and he was also known to coin a new word to force a rhyme. Still, even given the freedom of not having to know how to properly spell anything, inventing 1700 new words is a miraculous achievement, especially in an era that saw the rise of Puritans and a Virgin queen who was allegedly bonking half the blokes at court. The mind boggles at the cracking profanities Will might have devised had he not been constrained by prudes.

So in celebration of the greatest artist and inventor the English Language has ever known, let’s raise a glass to the Will in our words.

The Serpent of Venice is available to buy now from all good bookshops
and online retailers.

Buy on Amazon
Buy on Waterstones
Buy on Foyles